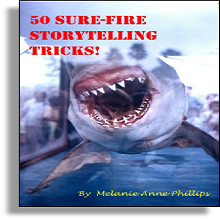 This first technique holds audience interest by revealing the true size of something over the course of the story until it can be seen to be either larger or smaller than it originally appeared. This makes things appear to grow or diminish as the story unfolds.

Conspiracy stories are usually good examples of increasing scope, as only the tip of the iceberg first comes to light and the full extent is ultimately much bigger. The motion picture All The President’s Men illustrates this nicely. Stories about things being less extensive than they originally appear are not unlike The Wizard Of Oz in which a seemingly huge network of power turns out to be just one man behind a curtain.