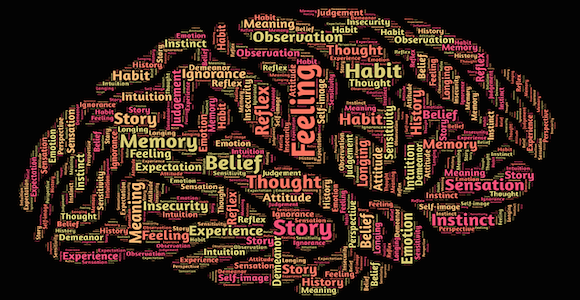 Over the years a number of my students have asked how the Dramatica chart can possibly describe the fullness of the human experience, especially since we, as a species, seem to have an unlimited supply of issues?

The quick answer is that even in chemistry there are a limited number of elements yet they combine to create the vast variety of materials in our world. Similarly, we only have a limited number of kinds of issues; they just manifest themselves in different combinations.

But there’s an even better (or at least a more technical) explanation how the vast panorama of our hearts and minds can be captured in a chart of finite size. Bear with me on this, and fasten your mental seat belts….

It is a well-known psychological fact that short-term memory can hold seven items (+ or – 2). We have seven days in a week, seven is considered a magic or lucky number, phone numbers are seven digits (minus the area code).

Why is seven so important? And more important still, what does this have to do with story and the size of the Dramatica Chart? As described above, the Dramatica Chart is built from eight items – the four external dimensions and the four internal ones. And that’s about as big a thought as the mind can hold at one time.

As an illustration, try this thought experiment. Picture a piece of twine. Easy to do. Now, picture that twine twisted along its length like a candy-cane. Again, pretty easy. Next, imagine that twisted twine again twisted into a spiral shape like a slinky. In your mind’s eye, you can probably still see the twists on the twine itself, even while you are also seeing the length of twine wrapped into that spiral shape.

Now, take that slinky-line twine, and spiral the spiral. You know, like you used to do as a kid. You take a slinky, stretch it out, then wrap it around your leg in a spiral. At this point, though it take a bit of work, you can probably still see the candy-cane twists along the body of the twine, even while simultaneously observing the slinky shape of the overall length of the twine and the bigger spiral as it wraps around your leg.

Finally, remove your leg from the center of the largest spirals and assume the twine holds its shape. Try to go one more level and twist the spiraled spiral into a larger spiral, even while maintaining the candy cane twists on the twine itself.

If you are like most people, you’ve reached your limit. You can focus on any part of this construct and see it clearly, as well as the twists one level larger and one level smaller. But to try and picture a three dimensional object that is twisting at four different levels – well that’s seven things to consider and is the limit of short- term memory.

Go any larger and you’d be hard pressed to find someone who could see the smallest twist all the way to the largest at the same time. Theoretically, it is not possible for a mind that exists in a three dimensional brain to go that far.

This gives us eight places to look. But, at any given moment, our mind – the seat of our consciousness – has to be somewhere. So, our “self” sits on one of these areas to look at the other seven. That gives us one place to be and seven slots we can fill with information. And that is why our short-term memory is just seven items.

Getting back to the Dramatica Chart, because it provides all eight dimensions, it can produce with it as much detail as we can hold in our minds at one time without losing track of the big picture.

Recall our discussion of how a story structure needed to include all the ways the audience might consider to solve the story’s problem in order to prove to their satisfaction that the author’s purported solution is the best of the worst. What is to keep the audience from coming up with an infinite number of alternatives? Simply, for any given problem, the capacity of the audience mind is limited by the same seven dimensions (plus one to stand on) factor. If you satisfy all the potential solutions within those eight dimensions, you satisfy the audience because anything larger or small that goes beyond that scope would seem unreasonable or not pertinent.

In Dramatica Theory we call this limit, the Size of Mind Constant. And, we call any story that covers all the reasonable ways in which a given problem might be solved a Grand Argument Story.

Author’s arguments may be insufficient or may be overstated, but a Grand Argument story is one in which the argument is just big enough and no bigger than necessary to cover all reasonable alternatives as defined by the size of mind constant.

And that limit? Well, that’s what determines that the Dramatica Chart is four towers, each with four levels.

So leaving theory behind (for quite a while we hope) all you need to do as an author is explore your story’s problem to full extent of the Dramatica Chart and your argument will be exactly the right size to convince any audience.

Watch the entire 113 part  series free on our web site…

Transcript of the soundtrack from this video:

Let’s look at the central concept in Dramatica: the Story Mind. It’s what makes Dramatica unique. Dramatica says that every complete story is an analogy to a single human mind trying to deal with an inequity.

That’s quite a mouthful, but what it really means is that every complete story is a model of the mind’s problem solving process. In fact, it says that all the elements of the story are actually elements of a single human mind –  not the author’s mind, not the audience’s mind but a mind created symbolically in the process of communicating across a medium to reach an audience. It is a mind for the audience to look at, understand and then occupy. That’s the story’s structure itself.

Characters, plot, theme and genre, are not just a bunch of people doing things with value standards in an overall setting. Rather, characters, plot, theme and genre are different families of thought that go on in a Story Mind, in fact that go on in our own minds, made tangible, made incarnate, so that the audience might look into the mechanisms of their own minds – see them from the outside looking in – and thereby get a better understanding of the problem solving process, so when a particular kind of problem comes up in their lives, they’ll have a better idea how to deal with it.

This is a video clip from the “classic” 1999 12 hour video program on narrative structure entitled, Dramatica Unplugged.

In this segment, the key concepts and breadth and depth of the Dramatica Theory of Story are presented in concise form.

Free on our web site:

Idea Spinner, my newest product for writers, is being released today for just $19.95. Starting with your initial concept, Idea Spinner sidesteps creative block and helps you quickly create an extensive Idea Web of interconnected material for your story.

Click here to check it out on our web site and view the demo video below:

Characters in To Kill A Mockingbird