A lot of people, writers included, use the words “hope” and “dream” pretty much interchangeably. Fact is, each describes a completely different way of imagining the future. Being clear not only of their definitions but of the different states of mind each invokes will not only help you better communicate with your readers or audience, but may also open a deeper level of sophistication in the message you are trying to convey.

Hope is a desired future to which at least one definitive pathway exists. It doesn’t have to be a sure thing or even a likely outcome that the hope will be achieved – just that there is at least one causal path that, if completed, will arrive at the desired future.

For example, if one hopes to graduate, it is a matter of following a laid out series of steps that, when completed, will result in a diploma.

In contrast, Dream is a desired future for which no definitive pathway exists.  Dreams may be likely to be realized or may be nearly impossible, but there must be at least some possibility of being achieved or it is not a Dream but a Fantasy.

For example, if one dreams of becoming a movie star and sits around a popular restaurant for studio executives every day, there literally is no Hope, but the dream can remain alive forever.

It is important to note that the pathway to achieving a hope is not necessarily only linear.  While getting a degree may require taking some course in given order (101 before 201, for example), other course are electives and the only requirement to achieve the hope is that a certain number are fulfilled, regardless of the order.

Similarly, one can try to realize a dream by taking steps, such as singling out a studio exec and stalking them, or by creating a favorable environment, such as showing up not only at a restaurant, but also at a gym and a charity fundraiser, believing that by being more visible, the odds are increased for being “noticed.”

To be a true hope, there must be a certain cause and effect relationship between the steps or conditions in which one engages and the achievement of the hope state.  But a dream, by definition, is built on indirect relationships and influence, rather than certain connections.

It is this absolute association that is not present in dreams.  But from an emotional standpoint, there is no difference between hoping and dreaming.  Each is a future state that is highly desired, but in hoping, one expects that future if all the conditions are met, while in dreaming, meeting the conditions provides no guarantee.

In Dramatica theory, Hope vs. Dream is a thematic conflict.  It describes stories in which the message revolves around proving that in the given situation of that particular story, it is either better to hope or to dream.

Is one deluded by an intense dream into thinking there is real hope?  Or, is one missing out on life experience and the rare but real advent of a lucky chance by confining oneself to only those things for which hope exists?

We’ve all seen these kinds of stories in books, movies, television and stage plays.  As an author, it can improve both your work and your life to explore the difference between the two.

Here are the specific definitions of Hope and Dream from the Dramatica Dictionary:

a desired future if things go as expected

Hope is based on a projection of the way things are going. When one looks at the present situation and notes the direction of change, Hope lies somewhere along that line. As an example, if one is preparing for a picnic and the weather has been sunny, one Hopes for a sunny day. If it was raining for days, one could not Hope but only Dream. Still, Hope acknowledges that things can change in unexpected ways. That means that Hoping for something is not the same as expecting something. Hope is just the expectation that something will occur unless something interferes. How accurately a character evaluates the potential for change determines whether he is Hoping or dreaming. When a character is dreaming and thinks he is Hoping, he prepares for things where there is no indication they will come true.

Dream describes a character who speculates on a future that has not been ruled out, however unlikely. Dreaming is full of “what ifs.” Cinderella dreamed of her prince because it wasn’t quite unimaginable. One Dreams of winning the lottery even though one “hasn’t got a hope.” Hope requires the expectation that something will happen if nothing goes wrong. Dreaming has no such limitation. Nothing has to indicate that a Dream will come true, only that it’s not impossible. Dreaming can offer a positive future in the midst of disaster. It can also motivate one to try for things others scoff at. Many revolutionary inventors have been labeled as Dreamers. Still and all, to Dream takes away time from doing, and unless one strikes a balance and does the groundwork, one can Dream while hopes go out the window for lack of effort.

Learn more about Theme in my book: 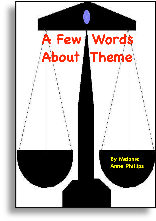