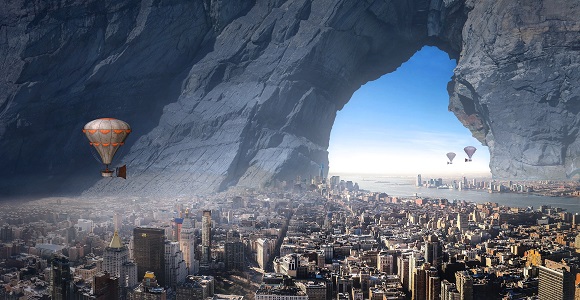 By understanding how the structure of fiction relates to the real world, we can better fashion our stories and perhaps even convey something to our readers or audience that they can use in life.

We all sense that stories have some sort of structure because we see the same dramatic patterns over and over again.  If there were no structure at all, there would be no patterns.

In the case of characters it is easy to see that while they bear resemblance to folks we’ve met, they are also highly idealized, often accentuating a single attribute above all others that defines them as a personality type or even an archetype. From this, we can speculate that while fiction is similar to what we experience every day, it isn’t exactly the same thing.

In this article I’d like to share with you some of the insights into the relationship of story structure to real life that I have uncovered in my quarter century as a teacher of creative writing.  (Oh, and being the co-creator of the Dramatica theory of narrative structure doesn’t hurt either.)

To begin, let’s first look back at the origin of stories and what some notable people have said about their nature.  Consider an age before stories: a time when the concept of creating a fictional representation of the real world simply hadn’t occurred to anyone yet.  Communication would be a simple representation of things and events that actually happened – a way of sharing information or obtaining help or even garnering sympathy, love, or respect.

But as we all know, it wouldn’t take long for someone to realize they could leverage more of what they want and avoid more or what they don’t by fudging the facts, or even relating an outright fabrication.

Of course, fiction didn’t really happen after people starting relating truthful tales.  Since we all like to put our best foot forward by nature (even if it is made up a bit), fictional stories developed concurrently, right along with the actual ones.  And so the ranks of the reporters of real events and the purporters of unreal ones grew right along side each other.

At the same time, those bent on understanding life and sharing what they learn might create fictional stories that summed up the lessons they’d learned from personal experience.  Others might simply want to describe how things worked in the real world without including a lesson, moral or message at all.  And others might see the advantage of leveraging untrue stories to paint their enemy in a bad light, get people to behave as they wanted them to, or to elevate themselves to a position of power.

No matter what the reason they were created, it was soon discovered that to be effective fictional stories had to include certain moments (we call them story points now) that formed the lynch pins of a web of logic and passion that could convince an audience to buy into the story: to take it either as the truth or as a true insight into life and how to live it.  Hearts and minds were swayed.

Eventually a whole cadre of story points turned up that became the conventions of storytelling – things like having a goal and requirements for the goal, a main character that the reader or audience can identify with, a whole slew of heroes and villains and variations of the same, acts, and scenes, and beats, the leap of faith, character arc, archetypes, genres, messages, themes, and on and on.

And yet, though most everyone, even folks who aren’t writers, are aware of most of these, nobody really knew how they fit together or, as per the subject of this article, exactly how they related to the real world.

This is not to say that many notable attempts have been made over the centuries to understand and document what story structure is.  Aristotle, for example, offered a landmark investigation into the nature of dramatics in his classic book, Poetics.  From it, we ended up with the concept of a three-act structure drawing on his assessment that “for everything there is a beginning and an end, and therefore there must also be a middle.”

Of course these days we write one-act plays, three-act movies, and five or seven act television episodes.  We know they work, but a lot of writers still have no clue why.

Others have taken a serious stab at explaining what story structure is and where it comes from including Jung’s archetypes, Joseph Campbell’s Hero with a Thousand Faces, and Chris Volger’s refinement of Campbell in his book, The Hero’s Journey.

Though each of these explanations of story structure (and many others) provide some really good insight, like all the king’s horses and all the king’s men, it has been difficult to pull all the story points together and fashion a complete description of what story structure is that covers all the bases and doesn’t have exceptions.  Nonetheless, they are useful guidelines, though some are more like recipes that work only for certain kinds of stories, rather than a system equally good for any kind of story.

Armed with this short history, here’s what I have to contribute to the understanding of what story structure is and how it relates to everyday life:

Everyone one of us shares certain basic human attributes such as the ability to reason, a healthy skepticism, and sense of conscience and temptation.  In our own lives, we use the full complement of these traits to try and chart our best course in an uncertain world.

When we get together in groups, however, it isn’t long before someone emerges as the voice of Reason for the organization, and another becomes the resident Skeptic, and yet another will speak as the Conscience.  Eventually any group that is large enough will self-organize so that all fundamental human attributes will be represented by a different individual in the group.

As students of the human animal, storytellers would see these personality types defining themselves over and over again whenever a group is formed.  If they were to tell stories that rang true, they needed to ensure that each of these attributes was represented by a different character in their stories.  So, in a sense, the group begins to function as if it were an individual with its own complement of traits.  And since the very same types needed to appear in every complete story, they became the archetypes.  Simple as that.

Further, each of us has a sense of identity (“I think therefore I am”).  Similarly, within the group-mind, one individual will rise to represent the identity of the group, such as Walt Disney, Steve Jobs, or a presidential candidate embodying the identity of his entire party.

In the real world, we get a sense of belonging by defining the nature of our group as in “I am a Californian” or “I am an author.”  Though the nature of each individual in the group can vary widely, we are drawn into a comradeship when we define our tribe, our profession, our gender, or our generation.

Storytellers would see that each group had an individual who embodied the group – the one with whom all members of the group could identify.  And that individual became the main character in the conventions of storytelling.

I could go story point by story point to show how each of these elements of fiction has a counterpart in real social organization, but you get the idea.  Yet that is only part of how story structure relates to the real world.  Though I won’t try to prove it here, it turns out that the way story points interact in fiction to create dramatic tension mirrors the way the way people interact in groups that creates social tension.

Further, the group (be it fictional or real) has its own agenda and quite a bit of inertia, and the main character (or group identity) has his or her own personal agenda so the two are frequently in conflict.  In fiction, the core of all dramatic tension is created by the demands of the group chafing against the personal needs of the main character.  Yeah, that’s a pretty big bite.  You might want to chew on that one for a while before you decide if you want to swallow it or not, but it is quite a concept that would explain quite a bit.

But again, I’m just sharing what I’ve learned in twenty five years of studying story structure.  I’m not trying to prove it, just to share it.

Bottom line is that the structure of stories is an idealized model of what goes on in the real world.  That’s why we find value in stories: they resonate with us, with our own lives.  On the one hand, they are familiar, one the other, it is like stepping into someone else’s life.  We are immersed into the fabric of a voyeuristic journey and emerge changed by it, carrying the passions and understandings of what we just experienced into our own lives in which we now think, feel, and behave differently as a result of merging with the identity of the main character.

That’s a pretty good place to stop for now.  If you’d like to more, browse this blog, check out my books on story development, try my StoryWeaver software for building your story’s world, or our Dramatica software for structuring it.

Thanks for your time, and may the Muse be with you.