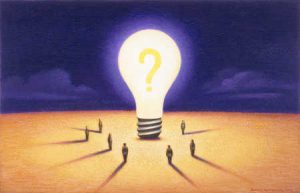 Here’s the “digest” version of the origins of Dramatica…

Chris Huntley and I began our exploration of story structure in 1980. He and I had met a few years earlier while we were both attending the University of Southern California and both making short films.

I had left school early to go to work in the industry and, frustrated by working on the periphery of the industry at that time, I put together a low-budget feature film project and enlisted Chris’ partnership in producing a movie.

The result was a horrible little film that suffered not so much from budgetary restrictions as from our lack of knowledge of sound story structure. So, when we began to consider our next production, we thought we’d first take a stab at trying to determine what a sound story structure ought to be.

We made lists and graphs and assembled everything we knew. And we discovered… that we didn’t know much about story structure! In fact, we put the whole project on hold until we could gather a little more experience from the industry and from life in general.

Chris went into motion control special effects work for Imax movies, and I went into the industry at large as a writer/producer/director and mostly editor of non-features, high budget industrials, and educationals.

Later, Chris become the co-founder of Write Bros. – the company that created the world’s first screenplay formatting software (and won a technical achievement award from the Academy).

One day in 1991, Chris asked me to breakfast and asked if I’d like to start up our old story structure project again. I was thrilled to do so. I was editing a feature film at the time so each morning before I went off to the editing room and before Chris went off to be V.P. of his company, we’d get together over coffee and try to crack the story structure nut.

We were both committed to this project, and it wasn’t long before we started having some insights that made sense to us but that we had never heard in any of our classes at USC.

After six months, we had created a number of understandings about story structure, but lacked a unifying concept that would tie them all together. We tried starting a book about our findings, but got bogged down. Eventually, Chris suggested that we present our work to his partner, Steve Greenfield.

Steve was completely taken with the ideas we offered, and he and Chris determined that rather than a book, perhaps our best approach was to create a new piece of software for writers that would help them employ our concepts in building sound stories.

I was asked to come to their company as a consultant, and as my editing job had just completed, I agreed. Thus began a three year full-time effort to redefine the nature of what stories are and how they work.

Few are those who have the luxury of being paid to spend three years sitting in a room pondering the mechanics of story structure to the exclusion of all else. But that was the situation I was provided.

We began with index cards and post-it notes, sticking every individual concept (and there were hundreds of them) all over all four walls of my office, and later of the entire conference room!

Seeing it all spread out like that made it possible to note certain patterns and connections among some of these notions. We began to see that psychology played a large part in stories.

This came about by Chris asking a crucial question: “If the Main Character (like Scrooge in A Christmas Carol) is actually the cause of the story’s problems, why can’t he see it and just change?”

Of course, this spoke of issues far beyond stories that were essential to our own psychological issues as a species.

We started to gather all the psychological material we had developed into one place on one of the walls. Some of it seemed to fit well with the main character, but other material, though clearly psychological in nature, seemed to pertain more to the story at large, though we had no idea what to make of this. There was no pattern that explained it.

One day, while staring for the nth hour at that wall, it just hit me – maybe the psychological material we had discovered in stories weren’t about just the main character – maybe they were about the story itself. Maybe the story itself had a psychology! In fact, perhaps story structure was a model of the story’s mind!

I ran down the hall to Chris’ office and hit him with the notion. As was his practice, he leaned back in his chair, closed his eyes and fell into a meditative state, closing all else from his mind. After a few moments he sat upright and responded, “I believe you are right.”

From that point forward, everything we did was based on the Story Mind concept. We reorganized all of our material assuming that it referred to the psychology of the story’s mind. Suddenly, patterns appeared, relationships were suggested, and the various components we had discovered fell right into place.

Our arrangements became more and more complex until we found ourselves hard-pressed to make them work in a single chart. It was then that we tried putting the cards in levels, placing “smaller” units under larger umbrella units into which they seemed to fall.

But how to depict this nested structure? Chris played around with pyramid shapes, I tried twisting mobius strips around donut-shaped toroids. Eventually, we settled on the four towers – not as the only shape of story structure, but as the most convenient shape with which to appreciate its internal mechanisms and relationships.

Later, I read that Crick and Watson (the two fellows that discovered the double-helix shape of DNA) didn’t find it through observation. At the time, the best imagery available of DNA was made by bombarding DNA’s crystalline form with X-Rays.

But Crick and Watson had a gut feeling that the shape of “live” DNA was more elegant, perhaps some sort of spiral. They decided to play with a number of alternative shapes as candidates that might explain all the properties that had been observed about DNA. To this end, they ordered a set of custom-made industrial “tinker-toys” which were used by chemists to illustrate molecular bonds.

They play around with various combination until, while building a ladder shape, they twisted it to form the now-familiar double-helix. As soon as they actually saw this representation, then new intuitively that it was correct and ran off to share their work with colleagues.

Chris and I unknowingly followed the same process. In the years that followed, we came to the conclusion that the towers are like the crystalline form of DNA – it represents a mind’s psychology at rest. But the mind is a machine made of time – every component, every gear and widget is actually a process.

When you put it into motion to create a “live” model, like DNA it becomes a helix, but in the case of story structure it forms a quad-helix, rather than a double one.

That’s about as deep as I want to go into how the Dramatica Chart developed in the first place. But, as a special treat for those of you who are gluttons for punishment, here’s an explanation of the workings of the structure, conceptually (for now!).

Where to begin without getting all technical-ish… Well, that’s a good start already!

Okay. The Dramatica Chat has four levels. And it has four Towers. What do these represent? The four towers represent the four key elements of our minds. Just as DNA is made up of four bases: adenine (abbreviated A), cytosine (C), guanine (G) and thymine (T), the structure of the Story Mind is made up of four bases: knowledge (abbreviated K), thought (T), ability (A) and desire (D).

Knowledge is the Mass of the mind. Thought is the mind’s Energy. Ability is the equivalent of Space and Desire is the counterpart to Time.

Just as mass and energy can relate in a simple way, such as when force slams one billiard ball into another, thought can rearrange knowledge and bring disparate pieces of knowledge together or move them apart.

Ability is like space insofar as space defines the edges of what exists from what does not. Ability defines what we know from what we don’t know. It determines how much of anything is known vs. how much is unknown. It is from this that calculation that our minds assess our ability.

So, the four towers are Knowledge, Thought, Ability, and Desire. (Which is which and why is for a later discussion. This, after all, is just an introductory section for a conversational book about story structure!)

Existence cannot be understood wholly from either a material or immaterial perspective. Perception is required to enable existence, and vice versa. Thus, the Dramatica chart isn’t just some stupid cutesy little made-up list of a few dramatic concepts. Nope. Its actually a material/immaterial continuum in which all that exists can be described by its co-ordinates within the construct.

Now, before I start sounding like the “Architect” from the Matrix Trilogy (assuming it is not too late already), I’ll put these topics to rest for a while, and think about the next practical article on story development I can write for you.

Learn about my story consultation service