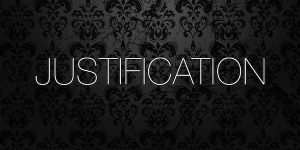 Problem solving tries to resolve an issue.  But if there is an obstacle to a solution, the process of justification tries to find a way around.  Sometimes characters get so wrapped up in the attempt to side-step an obstacle that they miss an alternative direct solution.

This can lead characters into misconceptions, irrational behavior, and conflict with other characters.

Let’s see how this happens.

A Simple Example of Problem Solving

Imagine a waitress coming through the one-way door from the kitchen into the restaurant. Her nose begins to itch. She cannot scratch her nose because her hands are full of plates. She looks for a place to lay down the plates, but all the counter space is cluttered. She tries to call to a waiter, but he cannot hear her across the noisy room. She hollers to a bus boy who gets the waiter who takes her plates so she can scratch her nose. Problem solved! Or was it justification?

What if she could have solved the problem just by shrugging her shoulder and rubbing her nose? Then there were two possible solutions, but one was much more direct. Rationally, either one would serve as well in that particular context, yet one was much more efficient and therefore more emotionally satisfying because it required less unpleasant work than the other method.

There’s a Problem In Your Solution!

If the waitress could not use her hand to scratch her nose, then using her shoulder was another potential solution to the same problem. However, trying to find a place to put down the plates is a generation removed from solving the original problem. Instead of trying to find another way to scratch her nose, she was using her problem solving efforts to try and solve a problem with the first solution. In other words, there was an obstacle to using her hand to scratch her nose, and rather than evaluating other means of scratching she was looking for a place to get rid of her plates. When there was a problem with that, she compounded the inefficiency by trying to solve the plate problem with the solution devised to solve the problem with the first solution to the problem: she tried to flag down the waiter. In fact, by the time she actually got her nose scratched, she had to take a round-about path that took up all kinds of time and was several generations removed from the original problem. She made one big circle to get to where she could have gone directly.

But, what if there was a limit: her itching nose was about to make her sneeze and drop everything. Then, going on that long circular path might mean she would sneeze and fail, whereas the only appropriate path would be to use her shoulder to scratch before she sneezes. But what if her stiff uniform prevents her shoulder from reaching her nose? AND what if the extra time it took to try the shoulder actually delayed trying the round-about method just long enough to make her sneeze before the waiter arrived? If she had only taken the great circle route in the first place, she would have had just enough time to solve the problem.

Paying the Price For a Solution

Clearly, problem solving turns into justification and vice-versa, depending on the context. So how is it that achieving results in the rational sense is not the only determining factor as to which is which? Simply because sometimes the costs that must be paid in suffering in a long, indirect path to a goal far outweigh the benefits of achieving the goal itself. When we try to overcome obstacles that stand between us and a goal (pre-requisites and requirements) we pay a price in effort, resources, physical and emotional hardship. We suffer unpleasant conditions now in the hope of a reward later. This is fine as long as the rewards justify the expenses. But if they do not, and yet we continue to persevere, we cannot possibly recoup enough to make up for our losses, much as a gambler goes into the hole after losing her intended stake.

Why is it that we (as characters) throw good money after bad? This occurs because we are no longer evaluating what we originally hoped to achieve but are trying to solve the problems that have occurred with the solutions we have employed. In the case of our waitress, she wasn’t thinking about her nose when she was calling to the waiter or yelling to the bus boy. She was thinking about the problem of getting their attention. Because she lost sight of her original objective, she could no longer tally up the accruing costs and compare them to the benefits of resolving the inequity. Rather, she compared each cost individually to the goal at hand: putting down the plates, calling to the waiter, yelling at the bus boy. And in each case, the individual costs were less than the benefits of resolving the individual sub-goals. However, if taken as a whole, the sum of the costs may far outweigh the benefits of resolving the original problem. And since the pre-requisites and requirements have no meaning except as a means to resolving that original problem, any benefits she felt by achieving those sub-goals should have had no bearing on determining if the effort was worth the benefits. But, as she had lost sight of the original problem, that measurement could not be made. In fact, it would never occur to her, until it was too late to recoup the costs even if the problem came to be resolved.

Does this mean the only danger lies in the round-about path? Not at all. If it were to turn out that there were NO direct paths that could work, ONLY an indirect one could resolve the problem at all. And if the existence of the problem is such that its inequity is not just a one time thing but continues to cause friction that rubs one physically or mentally raw, then the inequity itself grows the longer the problem remains, which justifies ANY indirect method to resolving the issue as long as the rate at which the costs accrue is less than the rate at which the inequity worsens.

But let’s complicate this even more… Suppose the inequity doesn’t worsen at first, but only gets worse after a while. Then what may have been the most appropriate response for problem solving at one stage in the game becomes inappropriate at a later stage. In such a complex web of changing conditions and shifting context, how is an individual to know what choices are best? We can’t. That is the point: we can never know which path is best because we cannot predict the future. We can only choose what our life experience has shown to be most often effective in similar situations and hope for the best. It does not matter how often we re-evaluate. The situation can change in unpredictable ways at any time, throwing all of our plans and efforts into new contexts that change their evaluation from positive to negative or the vice versa.

Stories serve as collective truisms, much like the way insurance works. Through them we strive to contain the collective knowledge of human experience so although we cannot predict what will happen to any specific individual (even ourselves) we can tell what is most likely the best approach to inequity, based on the mean average of all individual experience.