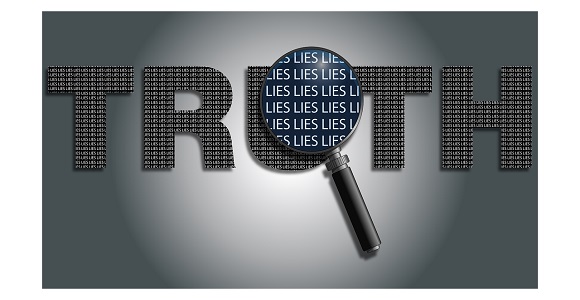 Like an iceberg, many of the elements of any given real-world narrative are often hidden from view, beneath the surface or around the corner.  Because narratives are fractal in nature, a portion of a larger narrative may appear to be complete in and of itself, much as a corner cut from a hologram will still present a complete image, just not from all angles that are available in the whole.  So, while the pattern of a narrative may be present, it may not be driven by its own internal dynamics, but by those of a larger narrative of which it is a part.

When there is some contextual effect, all narratives involved in this connection are warped by the presence of the others, leading to a lens-like phenomenon in which some elements are emphasized or deemphasized, or in the most severe instances may be completely hidden or may not really exist at all as they are no more than virtual images of no substance, established solely by the collective influence of the elements from other surrounding narratives.

In social psychology the term fundamental attribution error describes a cognitive bias in which an individual interprets another person’s actions as driven primarily by intent while deemphasizing or disregarding any external or environmental conditions which may have influenced their actions.

The opposite bias is the actor-observor error in which an individual overemphasizes the impact of external factors on his or her own actions.  These two varieties of the human desire to find meaning illustrate that meaning is not so much found as imposed.  In fact, either of these biases generates a false narrative.

The human mind seeks meaning in its environment by imposing templates upon its perception until a pattern is found that, for desired purposes, fits observation sufficiently.  A byproduct of this attribute is that we see animals in clouds, gods in constellations, images in ink blots and narratives in random elements.  As a result, we continually create  false narratives which appear to be supported by the situations that surround us, rejecting them only when the course of events diverges from narrative prediction.

No narrative is forever.  As long as it maintains itself as an internally driven confluence of structure and dynamics, it may be perceived as a closed system, constant in its function.  In other words, a true narrative maintains its identity through internal mechanisms.  Conversely, a false narrative may appear internally driven when, in fact, it is externally maintained by forces outside the apparent narrative, like a puppet on a string.  Such an apparent narrative provides neither an accurate description of the nature of the elements it contains, nor accurately predicts the course they will actually take.

Any narrative element, by itself, may have an infinite number of meanings.  It is only when it is taken in conjunction with other elements that the range of possible meanings for that element becomes constrained.  Eventually, sufficient interconnections among elements may be established to limit the potential meanings to the singular.

If, however, the initial element is misinterpreted in meaning, than each succeeding element may be cast into a another misinterpretation by the observer in the attempt to make it fit with the initial interpretation.  Individuals who do not provide sufficient ongoing clarification may inadvertently present a false narrative.  Individuals who do not intend to present a narrative may inadvertently present information that may be taken as one.

False narratives may be created with the intent to deceive  by limiting the number of narrative elements provided so that the observer completes the bulk of the narrative themselves, thereby taking ownership of the narrative by personalizing it.  This can be accomplished by limiting the scope of information available and/or the time in which to consider it.  In this manner, the author establishes a constrained narrative space in which both content and context are controllable to a desired effect.

In the end, no single narrative is ever completely true or completely false, except within the constraints of  a specified span of time and scope of .  As the philosopher David Hume  defined truth, while it works, it is truth, when it fails to work it is no longer truth.  Eastern philosophy holds that the Tao that can be spoken is not the eternal Tao, meaning that no truth can ever be so fully defined as to be universal Truth.  Zen professes that you cannot step into the same river twice, and American slang proclaims “that was then, this is now.”

Ultimately, rather than focusing solely on truth, awareness of the value and function of false narratives opens new perspectives by which one may become liberated from a singular point of view so that any consideration might be more flexible in the knowledge that while one narrative may appear to be definitive, there may be others which, even if in complete apparent contradiction with one another, may all, in fact, be equally and simultaneously both true and false.

These observations and techniques for working with false narratives are drawn from our Dramatica Narrative Structuring Software.  Click here to try it risk-free for 90 days.