Excerpted from the book, Narrative Dynamics

Transmutation of Narrative Particles and Waves

In this second article in the Dynamic Model series, I’m going to explore really intriguing problem – how particles can be transmuted into waves and vice versa, in terms of narrative.

Why this important to writers and even more important to psychologists and social scientists may not be immediately apparent, so first I’ll outline its potential usefulness and also how it is essential to the expansion of the Dramatica theory into a whole new realm.

Stories might end in success or failure of the effort to achieve the goal.  But how big a success, or how great a failure.  Now you are talking a matter of degree.  What’s more, is it a permanent success/failure or a temporary one?  And if temporary, does it always remain at the same level or does it vary, getting bigger, smaller, or oscillating in a symmetrical cyclic or complex manner?

Now, apply this to a character’s motivation.  It may be motivated by one particular kind of thing, but is that motivation increasing or decreasing?  It is accelerating or decelerating?  Is it cyclic or complex, is it transmuting from one nature of motivation to another?  And for that matter, how does a character actually change from one nature to another in a leap of faith?  Up the magnification and ask, “can I see the exact moment a character’s mind changes from one way of looking at the world to another?”

When is that magic moment at which Scrooge changes?  How long does it last?  Can we find the spot at which he is one way now and another way a moment later?  Is the change a process or an immediate timeless shift from one state to another?  What exactly is the mechanism – not the mechanism that leads him to the point of change, but the exact time at which that change occurs?

When can we say that a light switch is off versus being on?  Is it how many electrons are crossing the gap, is it the position of the switch at a visual resolution?  Is it the light getting brighter?  How bright?  How fast?  How about a mercury light that fades on and off at 60 Hz?  When it is on the nadir of the down cycle is it off?  And therefore, does the exact moment of a character’s change depend upon momentum?  Inertia?  Zeno’s paradox?

If writers could follow the rise and fall, the ebb and flow of dramatic potentials, resistances, currents, and powers discreetly for every element, every particle in a story’s structure, one could predict the cognitive and affective impact on the readers or audience as a constantly changing bundle of waveforms, each one thread or throughline in the undulating unbroken progression of experience.

In order for these applications to be realized, we need not only a dynamic model, but also the means of connecting it to the structural model.  In other words, we need to develop a particle/wave continuum in which particles can become waves can become particles in an endless flow of cascading shifts and transmutations.

So how does this interface work?  What stands between particle and wave that alters one to another?

In the next installment of the Dynamic Model series, I’ll offer some conjectures.

Available in Paperback and on Kindle 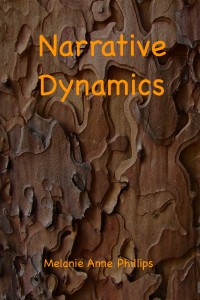