Excerpted from “Hero” is a Four-Letter Word

In part 2, we split the hero down into its component structural and storytelling elements.  But why would one want to do such a thing?  In this part, we provide a well-known example of how the components of the hero can be reassembled in different combinations to create a powerful dramatic impact.

In the classic story of racial prejudice, To Kill a Mockingbird, the Protagonist function and the Main Character View are separated into two different characters, rather than into a single hero.

The Protagonist is Atticus, played by Gregory Peck in the movie version. Atticus is a principled Southern lawyer in the 1930s who is assigned to defend a black man wrongly accused of raping a white girl. His goal is to ensure justice is done, and he is the Prime Mover in this endeavor.

But we do not stand in Atticus’ shoes. Rather, the story is told through the eyes of Scout, his young daughter, who observers the workings of prejudice from a child’s innocence.

Why not make Atticus a typical hero who is also the Main Character? First, Atticus sticks by his principles regardless of the dangers and pressures brought to bear. If he had represented the audience position, the audience/reader would have felt quite self-righteous throughout the story’s journey.

But there is even more advantage to splitting these qualities between two characters. Here’s how it works, step by step:  First, the audience identifies with Scout. And we share her fear of the local boogey man known as Boo Radley – a monstrous mockery of human form who forms the stuff of local terror stories. All the kids know about Boo, and though we never see him, we hear their tales of his horrible ways.

At the end of the story, it turns out that Boo is just a gentle giant, a normal man with a kind heart but low intellect. As was the custom in that age, his parents kept him indoors, inside the basement of the house, leaving him pale and scary-looking due to the lack of sunlight. But Boo ventures out at night, leading to the false but horrible stories about him when he is occasionally sighted.

As it happens, Scout’s life is threatened by the father of the girl who was ostensibly raped in an attempt to get back at Atticus. Lo and behold, it is Boo who comes to her rescue. In fact, he has always been working behind the scenes to protect the children and is not at all the horrible monster they all presupposed.

In a moment of revelation, we, the audience, come to realize we have been cleverly manipulated by the author to share Scout’s initial prejudice against Boo. Rather than feeling self-righteous by identifying with Atticus, we have been led to realize that we are just as capable of prejudice as the obviously misguided adults we have been observing.

The message of the story is that prejudice does not have to come from meanness, but will happen within the heart of anyone who passes judgment based on hearsay rather than direct knowledge. This statement could never have been successfully made if the elements of the typical hero had all been placed in Atticus.

So, the message here is that there is nothing wrong with writing about heroes and villains, but it is limiting. By separating the components of the hero into individual qualities, we open our options to a far greater number of dramatic scenarios that are far less stereotypical.

Are there more ways to split up the stereotypical hero and redistribute his traits?  Absolutely!  But to explore these, we first need to take apart our villain as well.

“Hero” is available for Kindle 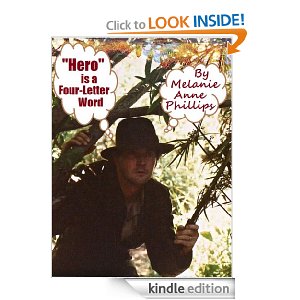