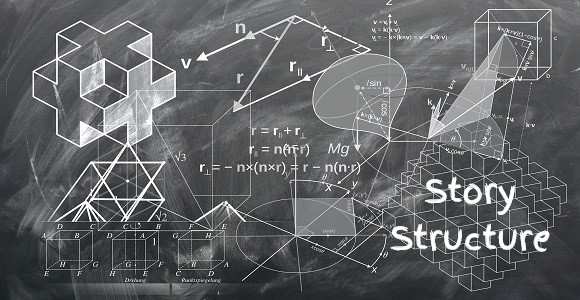 Story Structure | How Did Structure End Up In Stories?

In previous installments of this series, we’ve looked into where story structure came from and what it really represents.  In this segment we’ll explore how structure ended up in stories in the first place.

To begin, consider an old Gary Larson cartoon that showed open pasture land with a number of blobs with beaks scattered on the ground.  The caption was “Boneless Chicken Ranch.”

That’s pretty much why stories have structure.  Without a framework or some kind of scaffolding, stories would be no more than amorphous lumps of passionate wordplay that make no sense and hold no meaning.

We know stories are more organized than that.  We can see it in characters that interact in essential but predictable ways.  We can sense it when we intuitively know an act is coming to an end and a new phase of the story’s journey is about to begin.  And we can feel it when a story comes to a conclusion and we find ourselves satisfied that everything is all wrapped up with no loose ends.

Story structure, then, is a pretty sophisticated enchilada, which begs the question, how did it worm its way into storytelling.

For the answer, let’s travel back in time before there were any storytellers at all – back to the beginning of communication itself.

Let’s consider a fundamental issue: how is communication even possible?  Here’s why…

Scientists tell us that the first thing a baby learns is that there are things that are part of it (its fingers and toes, for example) and things that are not part of it (such as a bottle or toy).  That’s a pretty big leap, actually: “Not everything I perceive is part of me.”

The next step is to recognize that one is not alone; “There are others like me who are not me.”  And finally, we come to realize that we have physical attributes in common with those others – we also have eyes, hands, feet, etc.

For a baby, it cries when it is hungry or when it needs to be changed, or when it accidentally slams its arm onto the hard posts of its cradle.  And then another epiphany happens: the baby makes the connection that when one of the others does something like bump their arm on the cradle, they exclaim an audible pain sound as well.

Soon the baby begins to realize that these others react the same way it does to the same stimuli (not in those words of course).  And from this, the final step of connection is that if the others respond the same way to the same things, they  must be having the same experience (pain in this example) as the baby experiences.

This is the fundamental human connection and the foundation of communication: You look like me and feel like me, so I can  understand what is going on with  you by considering what would make me act that way.

From there, it is a pretty small step for a child to understand what’s going on when an adult steps on a toy, for example, and this leads to the ability to anticipate the reactions of others by knowing how one would react oneself to the same situation.

What’s more, the child can now learn by seeing an adult or other child do something that has never happened to it before and watch how the other person responds.  All these things we do in common because our brains, and therefore the seat of our minds, is the same.  Where we differ are in the unique experiences we have.

Now all this happens without any intent to communicate.  But what if we want to get some help from others with a problem?  For example, we’re hungry and we would like someone to give us some food.

We might approach this by trying present some physical actions that we anticipate the other person would understand because if they did those actions it would have a certain meaning.

So, we rub our belly with a pained expression on our face and point plaintively at our open mouth.  Most anybody on the planet is going to see that and understand we wand to eat.  That’s because underneath it all we’re really all the same.

In this manner, sign language develops, and at its most basic level, it conveys meaning across cultures and time.  Even complex descriptions of a journey and what was found can be transmitted and received.

For example,  you point in a particular direction and use your finger to indicate walking, then walking up and down a series of hills, then being surprised by something.  You reach out and start pulling small items off the thing you found, putting them in your mouth, chewing, swallowing, and rubbing your belly with a satisfied smile on your face.

It’s really just charades, and a lot of communication can be sent using nothing more than this.  You can even move beyond simply reporting  your condition or something you did and begin to warn folks off from things you’ve seen turn bad the same way over and over again.

For example, you discover a certain kind of berry bush and, through personal experience, have come to know that such a bush often has a bear nearby because they lover this particular kind of fruit.

So, you train your children to avoid those kinds of bushes, and tell them why – all using sign language and example, perhaps by showing them such a bush and using charades to illustrate a bear attacking, then pointing at the bush and illustrating, “No!” non-verbally.

Now we’ve moved into a new kind of communication.  We are no longer trying to relate an actual event or a current condition, but are trying to convince others to act in a certain manner based on summing up our personal experience.  We might do this out of compassion or altruism, or for some self-serving reason, ranging from giving folks bad directions to keep them away from something you want for yourself, or even to increase your power or hold over them, or to target an enemy.

Next, we bring language online.  Now we have words for things like hills, and walking, and berries, and bears.  And we also have words for complex concepts such as love, hate, jealousy, and selflessness.

And this is where stories really begin.  And, honestly, they really haven’t changed all that much since then, save for being a bit more sophisticated and detailed.

But here’s the crux.  When you are telling a story to manipulate people’s hearts and minds, no matter why you are doing it, you take on a burden of proof if you are to convince them to accept your point of view and adopt it as their own.

Prior to this, simply describing a series of events or a quest or journey (whether true to life or a made up fiction) only required that it made sense and felt right.  Simply put, there are no holes or missteps in the logic of it and the emotional path of the people you are talking about follows a believable flow from one feeling to the next – no gaps, no unmotivated changes.  This mirrors real life and your audience will think, “Sure, that could happen.”

In short, just conveying information is a simple statement that this leads to that and ends up here.

But now that you are trying to manipulate your audience by telling them they should never take a particular path or always so something particular in a given situation – well you’ve moved beyond a simple statement to a blanket statement.  There will be some who say, “Well what wouldn’t happened if the fella in your story tried this” or “What if he had done that instead?”

If you are an early storyteller and your audience is right there, you can counter that rebuttal to your blanket statement by adding additional information by explaining how your character would have ended up worse off if he had done as the audience member suggested, and therefore your proposed approach is still best.

If you could counter any rebuttals that come up while you are telling the story, you’ve made your case and your audience will likely buy into it.  So, if your point is strong, you’re likely to prevail in  your efforts to convince your audience.

But a problem arises when the story is repeated by others who haven’t thought it through and can’t counter those rebuttals.  And, if it become a ballad, or is published in written form, there’s no countering argument at all, so the blanket statement is rejected.

The solution, of course, is to include in the story all the counter-arguments necessary to counter any reasonable rebuttal.  In this way, the story become pre-loaded with a complete supporting argument for the author’s point of view, rather than just a blanket statement born of experience.

Such a beast is a much more powerful kind of story and has much more impact on an audience than the unsupported blanket statement.

Problem is, how can you anticipate all the exceptions an audience might take to your story so you can incorporate counter arguments?  Well it turns out, the same kinds of rebuttals keep coming up over and over again, regardless of the story.

For example, audiences want to see what happens if you try to figure things out and also what happens if you just charge on ahead driven by passion.  Eventually, this leads to the creation of a couple of archetypal characters who represent these two approaches: the Reason archetype and the Emotion archetype.

You see these two characters (and a lot of other archetypes) in every single story that feels complete.  And you see these characters in every day life as well.  We all know someone who always tries to figure things out and someone who just follows their heart.

We all have a sense of logic and a passionate heart, but we tend to favor one over the other.  So, in an audience, we’re likely to see a hole in a story if we don’t see our favored approach taken.  And those are just the kinds of holes the author needs to fill if they are to have an airtight argument that their blanket statement is sound.

And so, in our characters, our plot, our theme, and our genre, storytellers began to see what dramatic elements were always necessary to include to make a sound argument to make their point.

Very gradually, these elements became the conventions of storytelling – to have a protagonist driven by a personal issue, to have a goal with specific requirements to be met and a consequence to face if they aren’t – these and scores of other items became nuts and bolts that form the framework of story structure – the scaffolding that holds the story up so it doesn’t suffer the same fate as the boneless chicken ranch.

In other installments, we’ll see how these essential dramatic items fall into families of similar traits, and can actually be accessed through something of a Periodic Table of Story Elements, providing a really clear look at story structure and a really useful way of accessing it.

This entire series is drawn from our book on the subject that we published way back in 1991, Dramatica: A New Theory Of Story.  Just click on the link to read it for free in a downloadable PDF.

Until next time, May the Muse be with you!