Read it free on our web site

Also available in Paperback
and for your Kindle

Before the final version of Dramatica – a New Theory of Story there was an earlier draft that contained unfinished concepts and additional theory ultimately deemed “too complex”. As a result, this material was never fully developed, was cut from the final version of the book, and has never seen the light of day — until now! Recently, a copy of this early draft surfaced in the theory archives. The following are excerpts from this “lost” text.

Because the text that follows was not fully developed, portions may be incomplete, inaccurate, or actually quite wrong.

It is presented as a look into the history of the development of Dramatica and also as a source of additional theory concepts that (with further development) may prove useful.

This segment represents a whole new, previously unmentioned aspect of Archetypal Characters. After developing the original eight Archetypes and their Elements with Chris, I went on to consider what the Archetypes might look like in the Methodologies, Evaluations, and Purposes. Theory-wise, if the Problem Element of the Objective Story falls in one of these other dimensions of characters, then the Elements in those dimensions would be the principal ones by which the Archetypes would be known. In effect, the set of 16 Elements which contains the Problem Element creates its own, unique “flavor” or variety of Archetypes.

Often, the original 8 Archetypes can seem limiting and lead authors into creating complex characters when, in fact, all that is really needed is another flavor of Archetypes.

This excerpt describes the third and final group of 8 of 24 new Archetypes.

When a Character of a certain Motivation acts with a particular Method using a specific mode of Evaluation, her directions is dictated by her Purpose. Conversely, Motivation, Method, and Evaluation are directionless without Purpose. As a corollary to that, each of the four aspects of Character requires the other three, and is determined by the other three.

This being the case, let us list our Eight Simple Motivations along side the Simple Methodologies and the Simple Evaluations, and see if we can predict what the Eight Simple Purposes might be. 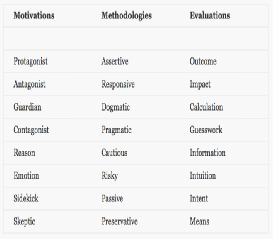 When we look at the three points we already have, we can extend that line to project the fourth point, Purpose. When we look at a Protagonist who is Assertive and Evaluates in terms of Outcome, her Purpose is to achieve a Goal. But what then of the Antagonist. The Antagonist, being Responsive and Evaluating Impact, is more concerned with the Requirement.

The Antagonist not Goal-oriented? Absolutely Correct. A TRUE Archetypal Antagonist will be consistent through all four character dimensions. She would be Responsive to the threat of the Protagonist’s Assertiveness. She would evaluate in terms of the Impact being felt.

Keep in mind that a villain is not the same as an Antagonist. In fact, stories often cast the villain as the Protagonist so that the story’s troubles are a result of the villain’s proactive actions. Then, when the hero responds, she is justified. In fact, it is hard to find an Archetypal character who is consistent through all four character dimensions.

Take James Bond, for example. Does he decide that there is something he wants to accomplish and then go after it, starting all the trouble? Not really. Rather, a villain does something to achieve what the villain wants, and Bond Responds.

The point being not to say that James Bond is not a “Protagonist,” but simply that he is not a consistent Archetype through all four dimensions.

Purposes of other Archetypes

For clarity, let us describe what the other Archetypes would be like if they followed through to consistent Purposes. Then, we can explore how the attributes might be mixed and matched when building specific characters.

For every Goal, there is a Consequence; for every Requirement, a Cost. The Archetypal Guardian is concerned with the Consequence: it is her Purpose to prevent it. The Contagonist, on the other hand is focused on the Cost: it is her Purpose not to pay it. Note the subtle complexities between the positive Purposes of the Protagonist/Antagonist and the negative Purposes of the Guardian/Contagonist.

So, we have half of our Purposes lined out. Next to the other three levels of Character they look like this: 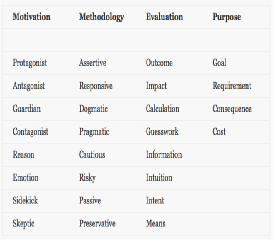 Just like any journey, a story may focus on the destination, or the sight seeing along the way. Sometimes it is more important where you are going, sometimes how you get there. When a Simple story is destination oriented, the first four Simple Characters are the Drivers. But when a Simple story is journey oriented, the Protagonist, Antagonist, Guardian and Contagonist are relegated to the back seat as Passengers and Reason, Emotion, Sidekick and Skeptic Drive. In fact, all eight are really driving all the time, just in different areas.

So what then would be the Internal Purposes that complete the list of Eight Simple Purposes? 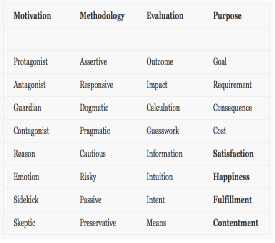 The difference in Purpose between the two groups that make up the Eight Simple Characters is clear. To see how these Purposes fit in with the Motivation, Methodology, and Evaluation traits, lets examine the Internal Characters one by one.

When you look at the Character of Reason, who Cautiously evaluates things in terms of Information, the Purpose of Satisfaction fits right in. To her counterpart, Emotion, doing things in a Risky manner based on Intuition, Happiness is the Purpose to which they aspire. Similarly, the Passive Sidekick evaluating the Intent, rather than the success, is a perfect supporter seeking only Fulfillment. Her adversary, the Skeptic, trying to Preserve her situation, not concerned with whether the Intent is for the good so much as what Means must be employed, finds her Purpose eventual Contentment.

Here are the sixteen Conclusions in Quad form:

Once more we have an arrangement of the sixteen elements into Quads, but not necessarily the most useful arrangement. As we described before, each of the valid arrangements is most appropriate to Character, Audience, or Author. As Authors we want to put things in the best perspective for our understanding. One of the beauties of DRAMATICA is that if something is adjusted from one valid perspective, it will be equally functional from all other valid perspectives, although not necessarily as meaningful.

This arrangement of the Conclusions is the fully Internal or Character perspective. This is the way we, as individuals, tend to group our Conclusions about ourselves and our environment. We see the elements of the upper left Quad are topped by Knowledge. And to us, these four elements describe what we know about the Universe itself. All of them pertain directly to our understanding of what is out there. In contrast, the upper right Quad deals with our physical relationship with the Universe. These are the Conclusions we draw about how we can affect our environment and how it affects us. This Quad is appropriately headed by “Ability”.

Shifting gears, we move to two Quads that describe our understanding of our Minds and our mental relationship with the Universe. The lower left Quad Concludes how we feel about our environment, aptly led by “Desire”. The lower right Quad organizes our Conclusions about ourselves, described prominently by “Thought”.

But what if we step out of that perspective for the moment and deal with these sixteen elements as if we were looking at someone else’s Mind. More precisely: looking into someone else’s Mind. We would see that Knowledge, Ability, Desire, and Thought are Conclusions that are the actual motivators for that individual. In truth, the other three elements of each Quad are used to arrive at those four motivating Conclusions. So to from a completely External view – the Author’s Perspective – we would group Knowledge, Ability, Desire, and Thought together to form a Quad.

Awareness and Self-Awareness describe the degree of our understanding of all the substances and forces in play, both in our environment and ourselves. Projection and Speculation, however, push that understanding into the future, which, due to our limited Perceptions, has the possibility of being to some degree inaccurate. Nevertheless, it is the best we can do with what we currently Know. So, from the Author’s perspective, Awareness, Self-Awareness, Projection, and Speculation define a third Quad.

With this new arrangement, the Quads appear like this: 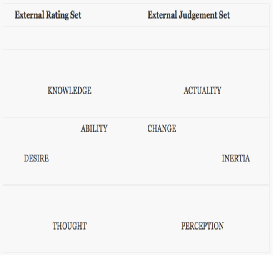 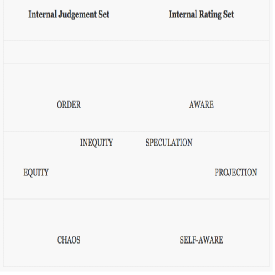 As we examine the Author’s Perspective arrangement, we get an entirely different “feel” for how we might use these Quads. In terms of designing Characters as and Author, these are the Dynamic Quads we would not want to violate: for the greatest dramatic potential, we would place no more than one trait from each Dynamic Quad in a single Character. Otherwise, the representation of the individual elements becomes easily muddled and unclear to the Audience.

As before, the DRAMATICA rules apply:

1. “Character” is a consistent combination of motivations, methodologies, evaluations and conclusions.

2. Characters should never represent more than one characteristic, methodology, evaluation, or conclusion from the same Dynamic Pair.

3. A physical “host” may contain up to sixty-four Characters.

4. A physical “host” should contain only one Character at a time.