Read it free on our web site

Also available in Paperback
and for your Kindle

Before the final version of Dramatica – a New Theory of Story there was an earlier draft that contained unfinished concepts and additional theory ultimately deemed “too complex”. As a result, this material was never fully developed, was cut from the final version of the book, and has never seen the light of day — until now! Recently, a copy of this early draft surfaced in the theory archives. The following are excerpts from this “lost” text.

Because the text that follows was not fully developed, portions may be incomplete, inaccurate, or actually quite wrong.

It is presented as a look into the history of the development of Dramatica and also as a source of additional theory concepts that (with further development) may prove useful.

This segment represents a whole new, previously unmentioned aspect of Archetypal Characters. After developing the original eight Archetypes and their Elements with Chris, I went on to consider what the Archetypes might look like in the Methodologies, Evaluations, and Purposes. Theory-wise, if the Problem Element of the Objective Story falls in one of these other dimensions of characters, then the Elements in those dimensions would be the principal ones by which the Archetypes would be known. In effect, the set of 16 Elements which contains the Problem Element creates its own, unique “flavor” or variety of Archetypes.

Often, the original 8 Archetypes can seem limiting and lead authors into creating complex characters when, in fact, all that is really needed is another flavor of Archetypes.

This excerpt describes the second group of 8 of 24 new Archetypes.

As there were Eight Simple Motivation Characters and Eight Simple Methodology Character, we might expect there to be Eight Simple Evaluation Characters, and so there are. A Character might evaluate using Calculation, or Guesswork. She could base her evaluation on Information or Intuition. She might consider the Outcome of an effort or the Means employed to achieve that Outcome. Finally, she might expand her considerations to include the Intent behind the effort and the actual Impact that effort has had.

Putting these Eight Simple Evaluations in Quad form we get: 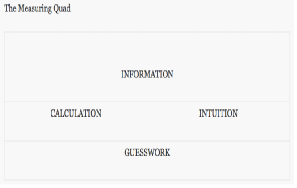 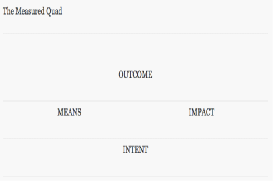 We can see the patterns of dynamic pairs created between the Eight Simple Evaluations. Let’s define each term for a more complete understanding of their relationships.

Calculation: The Calculating Character establishes an unbroken chain of relationships that leads to a conclusion. Her thinking will only carry her as far as the chain can be extended. As soon as she cannot make one thing lead directly to the next, she will not entertain any speculations beyond that point.

Intuition: The Intuitive Character forms her conclusions from circumstantial or nebulous input, rather than a definitive line of logic.

Information: The Character who relies on Information will entertain in her deliberations only definitive packets of data.

Guesswork: The Character who Guesses will fill in the blanks in her information with what appears most likely to go there.

Outcome: The Outcome measuring Character is only concerned with the immediate nature of the objective: whether or not, or how well it has been met.

Impact: Measuring Impact, a Character looks at the ripples in the big picture created by a particular outcome, or looks how well an objective accomplished that for which it was intended.

Means: The Character measuring Means in most concerned with how an Objective was met rather than if it was or how well.

Intent: When a Character measures Intent, she is concerned with the expectations behind the effort that led to the Outcome, whether or not the Outcome was achieved.

Again, these are aspects of Character we have seen before and are familiar with. In our case, their existence and definitions came as no surprise. Rather, we had just never previously considered them all at once as a group in which we could clearly see the relationships among them.

The real value to us as Authors comes in being able to mix and match Motivations, Methodologies and Evaluations. For example, should we be at work building a Character whose nature is best described as Guardian, we might select Dogmatic as her method and Calculation as her tool of evaluation. So this fellow might protect the Protagonist while stubbornly maintaining an ideology, but evaluating the progress of the quest in a very calculated manner: a Character of some individuality and depth.

What if we had the same Dogmatic Guardian who employed Guesswork instead. We can feel the difference in her nature as a result of this change. Now she would protect the Protagonist, stubbornly maintain an ideology, but base her evaluations of progress on conjecture rather than denotative relationships. Certainly, this person has a wholly different “feel” to her, without being wholly different.

The functionality of this is that the way we feel about a Character is based on the sum total of the combined effect of all levels of her attributes. However, when looking at these attributes as separate aspects, we can define the differences between Characters in a precise and specific way in terms of their content and determine if they are nearly the same or completely different. But when we see the dynamic view of the way in which a particular set of aspects merge to create the specific force of a given Character, even a slight change in only one aspect will create a substantially different “feel” to that Character.

When a Character oriented Author writes by “feel” she is sensing the overall impact of a Character’s presence. This is not very definable, and therefore dramatic potentials between Characters are often diminished by incomplete understanding of which levels are in conflict between two given Characters, and which are not.

We have already seen an example of this in our analysis of Star Wars. Han (as Skeptic) is only peripherally in conflict with Leia (as Reason). But Han as Dogmatic in directly in conflict with Leia as Pragmatic. If Han and Leia were to argue, there would be much more dramatic potential if they argued over trying a new approach than if they argued over whether or not they ought to take action.

Clearly, the ability to discern the specific nature of the attributes that make up a Character at all levels allows us to precisely define the nature of inter-Character conflicts, without losing sight of the overall feeling that each Character carries with her.

Looking at the Characters of Star Wars in terms of Evaluation only, the arrangement of attributes is a bit murkier. Since this is primarily a story of action, techniques of evaluation do not play a big role in the progress of the story and therefore have been more loosely drawn. Nevertheless, they are present, even if there is somewhat less consistency than at the Character or Method levels.

Attaching the Character names to the Evaluation Quads we get: 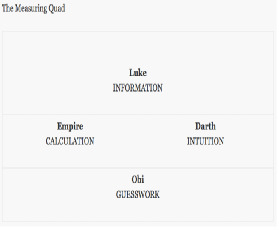 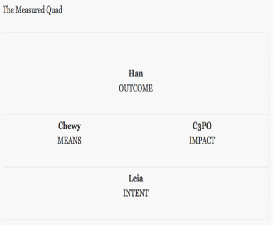 Again, we can see subtle conflicts in techniques of Evaluation between Characters that are compatible at other levels. For the first time, we can see the tension that as an audience we feel between Darth and the Empire in the “Board Room” scene on the Death Star where Darth constricts the breathing of the general he is “bickering” with. The general says to Darth, “…your sorcerer ways have not helped you conjure up the missing plans…”, essentially arguing against Intuition.

Looking at Luke, we note that in his dinner table discussion with Uncle Owen he argues his point that he should be allowed to leave with Information: the new droids are working out, all his friends are at the academy, etc. Another example is the moment Luke bursts into Leia’s cell to release her. Rather than use any other technique, he describes the situation to her simply by imparting information: “I’m Luke Skywalker. I’m here to rescue you. I’m here with Ben Kenobi.”

Obi Wan, on the other hand, relies on Guesswork when the Millennium Falcon is chasing the lone imperial fighter after coming out of hyperspace. He sees the supposed moon, and guesses, “It’s a space station!”

Han is completely Outcome oriented, “I’m just in this for the reward, sister!”, and is thereby again in conflict with Leia as Intent: “If money is all you care about, then that’s what you’ll receive.”

Chewy can be seen to focus on Means, when he refuses to don the binders for Luke’s plan to rescue Leia.

C3PO is always evaluating impact: ” We’ll be sent to the spice mines of Kessel”, and, “I suggest a different strategy R2… Let the Wookie win.”

R2, as noted, does not represent a manner of evaluation. We can see by the feel of his Character that he is motivated and has a method, but he never evaluates anything for himself, you just point him and he goes.

Once again, since Star Wars is an action oriented story, the techniques of Evaluation were not as developed as Motivation and Method.

As with the previous two levels of Character, the Eight Simple Evaluations can be divided into sixteen evaluations. In Motivation we had Action and Decision aspects, in Method we had Attitude and Approach. In Evaluation we have Passive and Active.

The Calculating Character sees data as Expectations wherein an unbroken chain of relationships that leads to a conclusion.

The Intuitive Character sees the pattern of her observations in the form of a Determination.

To arrive at a Determination, Intuitive makes Hunches.

The Character who revolves around Information will entertain in her deliberations only definitive packets of data she sees as Proven.

For something to be Proven, the Information Character will institute a Test.

Guesswork will consider even data that is, as of yet, Unproven.

The system she uses that allows her to accept Unproven data is to Trust.

The Outcome measuring Character observes the Results of an effort.

To see the Results, she looks toward the Ending of the Effort.

Measuring Impact, a Character looks at the actual Effects of an effort, as opposed to how well it met its charter.

To determine the Effect, the Impact Character examines how Accurately the ramifications of the effort confine themselves to the targeted goal.

Means is determined by looking at the Process employed in an effort.

When a Character measures Intent, she is concerned with the Cause behind the effort.

She looks at the aspects of the Cause that do Not Accurately reflect the scope of the goal.

Let’s look at these sixteen evaluation techniques in Quad form. 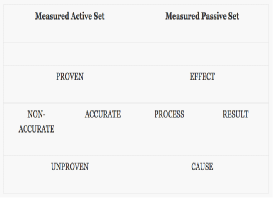 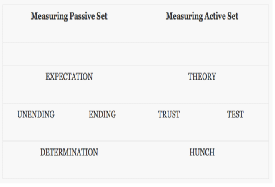 As before, these four groupings constitute the dynamic Quads of the Evaluation Set, and are subject to the same DRAMATICA rules as the characteristic and method sets.

Since all good things come in Quads, and since we have so far explored three sets of Character traits, we might expect a final set to round out that Quad as well. DRAMATICA calls that final set of characteristics, Purposes.